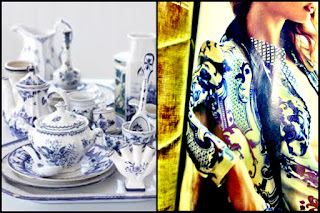 My friend boldly said that he "taught me Dior and Chanel", after I mistakenly associated Galliano with the later -

(I was pretty sure that he knows Galliano for his abrasive and uncontrolled language which, soaked in alcohol, resulted in winning the infamous award-for-anti-Semitic-remarks of 2011 (Anti-Defamation League welcomed his "recovery and redemption" - n.p. if I feel like reading a UN resolution it is because the issue was dead serious), than for his perfect dresses and fashion genius. Of course I know who Galliano is! I even know who his personal trainer is! - and this is a first. Usually, I only know stars, names, and faces, after years and years of Oscar nominations. I am that slow with what's ripe and hype.

I know Galliano. And I know Dior. And not from women magazines, which, trust me, is better. Best fashion writers I know work for non-fashion publications.)
But this is what I get for putting him through the misery of looking at two

Harper's Bazaar  (European edition) &  Vogue (US) for an entire afternoon. His commentary was refreshing and intuitive. "This [Cavalli Pre-Spring 2013 - amazing, perfectly tailored jacket - pic#2] reminds me of ceramic tea cups",  and he texts me photo #1 immediately after. What do you know?  this IS a porcelain inspired collection to its max, where everything: the metallic accents, the glossy texture, are thought to resemble the delicacy of little cups, with two other, paradoxical only when done poorly, ramifications: freedom of pursuing luxury and strictness of elegance.

Next page (on a architectural photography matte print magazine) was a photo from the early '90s of Christy Turlington wearing a long black dress. I just knew it is a Valentino! I was obviously happy with my fashionowledge especially because at that time my parents' apartment was internet free. AND the only fashion magazine I knew were Burda Style and Hello... (Yeah, Romania was a pretty depressing place)

Challenge: count how many times I wrote "Galliano"
at 9:00 AM