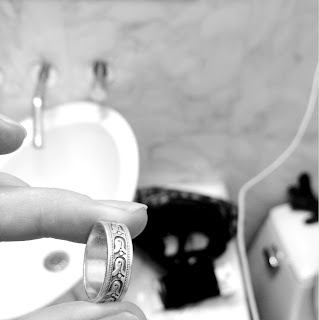 "You should have it - you are the only person I know that cares about her."

The second I heard her story - with very poor details  form a family member - I became her fan. So I started  the on line research, though at times it is looking like I am chasing a ghost. Not only do I need to know who Kazuko is, but also Anna, the one that gave her this ring, what appears to be an insignificant piece of jewelry if you are trying to sell it, which keeps its beauty hidden on the message written cursively inside: "Love Anna". Obviously, for a famous jewelry maker like Kazuko (she made Madonna's weeding veil in Like a Virgin and sold her pieces exclusively at Barneys New York), Anna chose something very simple, a hand-made silver weeding-like band, with delicate tulips motif.  Her nephew gave me Kazuko's ring after I shown my curiosity: "You should have it - you are the only person I know that cares about her."

Is not easy to put up with an "artistic" personality: caprice, rebellion, and independence. Such people tend to behave too delinquently and too childishly for the rest of the world, as eccentrics are not necessarily pillars of rigorousness and custom. But I imagine her as a young student of drama at NYU dreaming of Hollywood (coming from Tokyo on a full scholarship), and only talent allowing her to become a full time socialite/artist/designer/party amateur - a woman that bathed her name in glamor.

When she died, NY Times wrote that the one of the last eccentrics of NYC vanished. A sad piece celebrating her (secretive and sometimes controversial) life and grieving the early departure of a city's emblem.  People acknowledge rarities like her, hardly replaceable. The world of eccentrics is taken over by plastic figures, lacking sophistication and creativity, the only thing they can actually fabricate being their own image, a poor result equaling their humdrum personalities, strident and inappropriate like confetti in a garbage dump.

End note: I finally found somebody close to Kazuko. She calls her "my grandmother."
at 1:30 PM