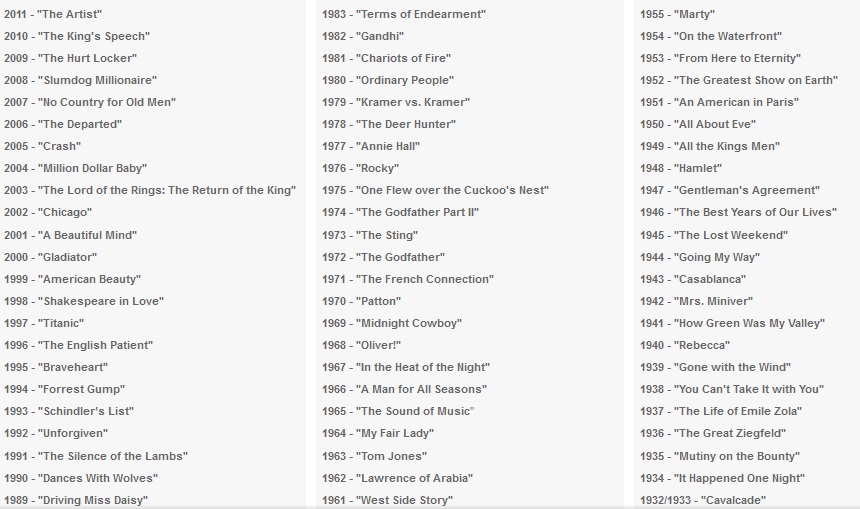 I don't know why people are still debating the intersection of politics and film. When this industry started, journalists were the script writers (!) and Hollywood was very much striving to be an empire as US was. They work hand in hand. Film is history, commodity, culture, and art. To analyze a film, one has to look at what is happening:

Nothing is meaningless - that is, all facts have equal value.


Argo won, Lincoln - big favorite. 2012 also came with Zero Dark Thirty - the story of the decade-long hunt for Osama bin Laden. Look at US (domestic as well as foreign) politics to understand US film. Look at US film to understand US politics. That is not because one is leading the other, but because they are both part of culture. The monster is dying in one period to reborn in another - the monster is based on the same content,communal fear, but takes different forms, as society evolves or, better say, changes:  fear of blackness, then woman emancipation, Asians, Latin Americans, Fascism, Communism, Terrorism. "The monster exists only to be read"  -  Cohen (not Leonard.) The monster, in US film, is the enemy of America (as a nation, as an empire), who took different hybrid shapes: from Vampires to King Kong, from bacteria to outside religions. The film is the resistance movement, and resistance is mirroring the society's resistance at some point (otherwise, you will have empty theaters.) And the monster, our incarnated fear, in the film, must always be killed.

Politics are not (always - I am not talking about countries where art is censored) controlling the film, but they have a common goal. They run as partners in the same race; they rely on each-other. Hollywood created a US consistent identity as much as politics were creating a US identity. But that is not new. Greeks did the same through sculpture and literature. At the binging of the 20th century, Mexico needed its own  film industry to be truly independent and control its portrayed image (and depicted history.)  Russia - they are part of the same topic.

The question here is not why film and politics are working hand in hand in US (as opposed to other countries where this is not happening???), but why Hollywood is more successful that any other country's film industry. For once, French started it. Spain was especially good. GB and Germany were legit competitors.