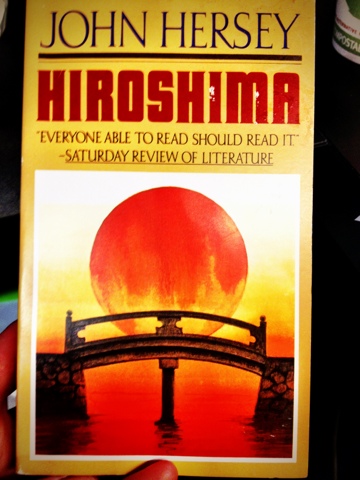 For whenever you have a couple of hours:

Pulitzer awarded John Hersey  follows the fate of six survivors and describes their experiences. At the beginning, people from Hiroshima believed that the US covered the city with gun powered and set it on fire. That would have been the least worse of all scenarios, and could not explain the silent blast, the blinding light, and the burns resulted afterwords.
The six survivors:

Miss Toshiko Sasaki, a clerk in the personnel department of the East Asia Tin Works;
Dr. Masakazy Fuji - a prosperous doctor running a private hospital
Father Wilherlm Kleinsorge, a German priest of the Society of Jesus,
Rev. Kiyoshi Tanimoto, pastor of the Hiroshima Methodist Church,
Dr. Terufumi Sasaki, A young doctor at the Red Cross hospital was 1650 yards from the center of the explosion
Mrs. Hatsuyo Nakimura, a tailor's widow and her three children.
"He was the only person making his way into the city; he met hundreds and hundreds who were fleeing, and every one of them seemed to be hurt in some way. The eyebrows of some were burned off and skin hung from their faces and hands. Others, because of pain, held their arms up as if carrying something in both hands. Some were vomiting as they walked. Many were naked or in shreds of clothing. On some undressed bodies, the burns had made patterns—of undershirt straps and suspenders and, on the skin of some women (since white repelled the heat from the bomb and dark clothes absorbed it and conducted it to the skin), the shapes of flowers they had had on their kimonos. Many, although injured themselves, supported relatives who were worse off. Almost all had their heads bowed, looked straight ahead, were silent, and showed no expression whatsoever." 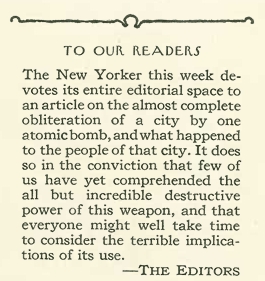 The story first appeared on Aug 31, 1946 in the New Yorker after serious debates; it took the entire issue and it was something never done by the magazine. The reaction was overwhelming. Newsstands could not keep copies of the New Yorker on their shelves. All over the world newspapers asked for the rights to print the story. Albert Einstein ordered 1,000 copies. The ABC broadcasting system read it on hundreds of its stations.
Modern editions like this finish with The Aftermath, the final chapter written forty years after the original article.Hersey returned to Japan to discover what happened to the six people he originally interviewed in the ensuing years. Amazing journalism.
at 11:26 AM