BONNIE (a little louder) Oh, Daddy! Yore such a slowpoke! 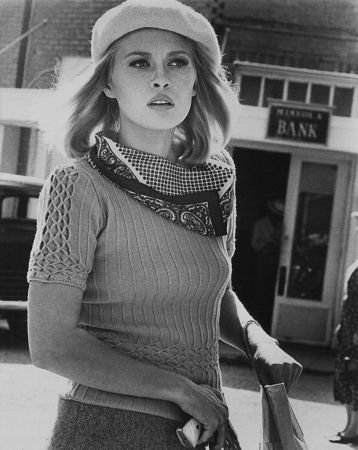 (behind the screen - original script here)

Blonde, somewhat fragile, intelligent in expression.  She is putting on make-up with intense concentration and appreciation, applying lipstick and eye make-up.  As the camera slowly pulls back from the closeup we see that we have been looking into a mirror.  She is standing before the full-length mirror in her bedroom doing her make-up.  She overdoes it in the style of the time: rosebud mouth and so forth.  As the film progresses her make-up will be refined until, at the end, there is none. The camera pulls back and continues to move very slowly throughout the first part of this scene.

As the camera continues to move away, we see, by degrees, that BONNIE is naked.  Her nudity is never blatantly revealed to the audience, but implied.  That is, she should be "covered" in various ways from the camera's P.O.V., but the audience must be aware of her exposure to CLYDE later in the scene.  This is the only time in the film that she will ever be this exposed, in all senses of the word, to the audience.  Her attitude and appraisal of herself here are touched with narcissism. The bedroom itself is a second-story bedroom in a lower-class frame house in West Dallas, Texas.

The neighborhood is low income.  Though the room reveals its shabby surroundings, it also reveals an attempt by BONNIE to fix it up.  Small and corny objets d'art are all over the tops of the bureaus, vanity tables, etc. (Little glass figurines and porcelain statuettes and the like.)

BONNIE finishes admiring herself.  She walks from the mirror and moves slowly across the room, the camera moving with her, until she reaches the screened window on the opposite wall.  The shade is up.  There are no curtains.  She looks out the window, looking down, and the camera looks down with her.

Over her shoulder, we see ...a man walking up the driveway... It is CLYDE BARROW....Obviously, he is about to steal the car. 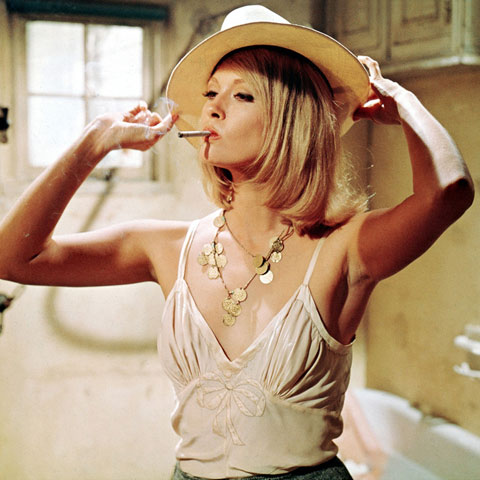 BONNIE closes the door and immediately begins fussing with CLYDE's hair, doing a scathing imitation of BLANCHE. Though her miming expresses her irritation at being closeted with the Barrow menage, it is also a peach doing an imitation of a lemon--and it is disarmingly sensual... 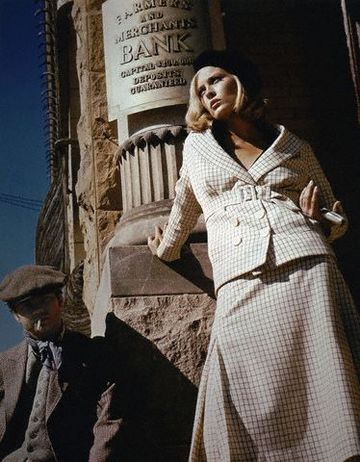