Patience - the living (albeit, passive) proof of my confidence. Or:another post about tights.

For four years I have considered my patience to be the living (albeit, passive) proof of my confidence. Should then the rhythmic leg dance under my desk be an accurate measure of my confidence (lack, thereof)? That is, as my confidence level goes down (Praise The Lord (of Pumps) slower than the inches of the hills are cut off by age imposing necessities) impatience grows. Impatience expresses very physically and it involves extremities, from biting nails to strange body moves like the cross-legs back and forth short air kicks. A few days ago I told my friend that I am going through a 'fashionable crises'. He understood after he saw me wearing this: black tights with man shoes on the lower level, knee length grey dress halfly (I am almost sure it is not a word, and clearly I don't care) covered by a sweat shirt with a brown leather jacket on top and a big bag. No, I won't re-size this to an X -Large photo; I am ashamed as it is. Granny! 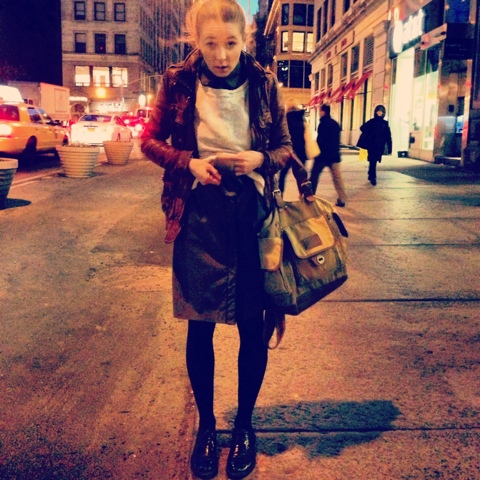 Four years of living between home, school, work, the only way to survive it being that the MTA guys (lots of love for that and only that) still allow you to drink coffee in the subway, unlike all those strange Asians. FYA I am calling Asians (now referring to Tokyo and Hong Kong) all those people that live in Asia regardless of their geographic roots and national identities because I live in NYC and we here believe that there are only a few peoples on Planet Earth: Europeans, Eastern Europeans and Russians, Terrorists, Asians, Africans (only for the real connoisseurs), Spanish, Americans, dah! (it's an onomatopoeia; I can, or should be able to, spell it whatever I want),  Arabs, and Alaskans, a new people born in the 2009 election campaign and are Sarah Palin cool - she invented a new cool, different from the old cool, a cool like the sarcastic pyramidal pants we women are wearing, those that are making our ass look un-toned (read: saggy) and/or flat (read: nonexistent), that are tight in the wrong places (ankles) and loose in the, excuse the repetition, wrong places (booty.) Yes, they are comfy and complement our I-hate-being-sexi-today attitude, and they are cool, but the opposite of tube-dress&stilettos cool, which more than half of the population think is cool (don't contradict me, do the math:

People who believe that tube tight dresses are cool:

Changes of paradigm:
- After work going outs: you are not celebrating the passing of miserable time during midterms and finals anymore, nor fight the stress, so hangovers (due to bad food or Bacchic cocktails) outside birthdays (mainly yours), NYE, and being dumped should be eliminated. On the same token, the evenings are now free like waved kisses in a train stations, so often is the word.
- Wearing what you picked from dry-cleaning over and over again because you don't have time to survey your closet is forbidden
- All those creams in the bathroom -  apply them every night, not every other night, not once a week, before the expiration date, like advised on the label
- High hills - for not all streets are paved with reddish cubic stone as they have at Columbia, which destroys even the most stable shoe with a slight attempt of a slim hill. So rock it.

More importantly, the most important, the subject name of this post, the title of my Ten Commandments: Never wear yoga tights again. Never:

-Not on a particularly cold, perhaps uninspiring, Thursday
-Not when you go for a stroll in a park
-Not on weekend days when you go downtown - which I generically call The Village and it starts around 14 Street and ends in the Hudson River.
-Not on a casual Friday at work
-Not when you have nothing clean to wear - in which case it is better to put your dirty jeans in the freezer for 10 minutes and wear them afterwords
-Not when your body screams that you are a young healthy and still able to have babies woman (that time)
-Ok, you can only wear yoga pants in two spaces: in a yoga class and when flying - hopefully organized flying, with a team of stewardesses serving half of plastic glass of water, which is something that I never understood: I want water. I am thirsty. I am not a bird. I can drink all those 100 ml of clear liquid with a sip. Yes, I am wonder-woman that way...I must admit that yoga tights are the best traveling option and they keep (All) the butt covered, not like the low raise jeans the woman on the isle seat on a 13 hours flight while sleeping and unaware was wearing....)

-Also, DO NOT wear tights when you write this post (I hate some of my old habits, like frowning when I read in disbelief, eating sun flower seeds, accepting bad coffee when good coffee is at a street cross distance)

A few more weeks and I am done. I feel like renouncing tights is as difficult and pressuring issue as quitting cigs. I also understand that this post about (not wearing) tights can be very much a shout on the need to see a head doctor, but it must be written and read by the writer a few times, as part of the therapy. I also hope that my fashion patience is a sign of confidence and not the one of I-can't-do-better, thus, the rhythmic leg dance.