I thought about writing my own interpretation... 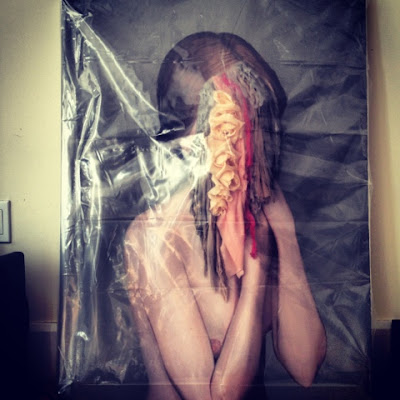 ...but I decided to let the artist speak for herself. I did not like the painting at the beginning, but it stayed covered as in the photo in the living-room for a month, and It grew on me. Decision made: my first art investment. The story, as told by the artist Annie Kyle:


Women have long been associated with ideal beauty, and this affiliation has permeated our society to the degree that a woman's youth and beauty are considered to be her most important virtue. Years of working in the fashion industry as a designer and stylist have made me acutely aware of our culture's overwhelming adoration of a specific type of superficially beautiful women. I have seen first hand how society's image-obsessed mantra mandates appearances to be maintained as a means of acceptance and even survival. Preserving and augmenting one's appearance is not intrinsic; compulsion to do so is a socially constructed behavior legitimized by generations of practice. Societal pressure derails a woman's attention away from her natural beauty, and corrupts her with unattainable ideals. Within my body of work, I utilize both conventional and nonconventional materials to explore feminine beauty and nature, natural appearances perverting into artifice, and how narcissism leads to a hyper-awareness of mortality.

Many species are born with bright colors, intricate patterning and lofty plumage as tools for attraction and survival; humans alone artificially adorn themselves. The Adornment series references the tradition of classic portraiture; however, perversely, my subjects are looking away, creating an anti-portrait that forces the viewer to project their own prejudices into the image. The oval shape of the canvas mimics that of a mirror, a reference to vanity that sparks in female spectators an uncanny experience. The elaborately patterned background environments form a rich tapestry that frames the decorative objects that the obscured subject wears upon her head. Beautiful yet incongruous, these objects create a pictorial paradox that represents the complexity of the natural world and the "feminine" disposition: bewitching, yet wild and confused. The paintings of the Elementum series are similar in theme and effect: identifiable female faces overwritten by an abundance of decadent materials whose application and form suggest the abject. The ravishing clothes and jewels that make up a woman's glamorous exterior spill forth in an ugly spew from the inside, revealing an obsessive inner turmoil. Rhinestones, faux pearls, synthetic flowers and fur supplant the natural treasures of the land and the sea, flora and fauna. These embellishments represent women's desperate and feeble attempt to superficially imitate the magnificence of nature. Without this artificial razzle-dazzle, women are susceptible to feelings of vulnerability.

Cultural obsession with feminine youth and beauty inevitably leads to heightened awareness of a woman's mortality. Decay creeps in as the years scale away, and no amount of makeup can cover a woman's dark base of sharp mortal certainty. Utilizing material assemblages of fabric, jewelry, synthetic hair and feathers, the Ravens series examines further the dark side of feminine vanity. This series explores woman's ravenous greed for a youthful appearance and immortality. The Vanitas series directly references historical vanitas paintings, employing similar images of birds, insects, flowers and fruit to symbolize the fleeting, ephemeral nature of life. Instead of the iconic vanitas skull, the series incorporates objects associated not with death, but with enhancing and preserving female beauty. These beauty products are presented as useless weapons against temporality, pathetic and somber impotents captured in tragic still life. Each unique painting depicts one such product or symbolic object succumbing to its own demise and uselessness. The Salt of the Earth series also incorporates still life imagery similar to traditional vanitas, yet offers a sense of illumination while emphasizing the rigid reality of ephemerality and existence. Salt is often considered the key to preserving one's youthful appearance, and the title of the piece derives from a biblical passage concerning the search for immortality. In the work, large crystalized formations of salt and a rusty old saltshaker are assembled among collections of earthly materials, each symbolic of the limitations of sensory experience and the value of life.

Further issues of vanity, femininity and mortality emerge in my work via allegorical analogies of women and spiders. Spiders represent fragility, patience and fatality, but they also often exhibit a wickedly seductive eroticism. Women are fictionalized similarly, as both delicate nurturers and destructive temptresses. Using torn pantyhose as spider webs, the Nympho-Imaginal diptych expresses the two sub-stages of a spider's life cycle: the nymph/juvenile stage and the imago/adult stage. The Nympho web is imperforated, at the peak of its seductive powers of entrapment. Adversely, the Imaginal web is torn asunder, rendering it old and useless. Fear of aging, with its implied loss of attraction and sex appeal, can dominate a woman's self-consciousness, ensnaring her in her own vanities. Embryonic similarly deconstructs women's dress materials, turning a glamorous gown into an ominous egg sac hanging above the spectator. Materials once beautifully composed are dissembled in a frayed mass of fabric. The maternal spider typically dies after laying the egg sac; the hanging structure evokes her imminent doom.

For Charlotte fashions a more sympathetic view of feminine mortality. The piece incorporates a graphic text design that directly references the uniquely severe children's story, Charlotte's Web. In most fairy tales, only villains die; heroes and heroines merely sleep for years, or else they're capable of returning from death back to life. Charlotte's Web stands apart, and serves for many children as an early introduction to the realities of death. The lady spider Charlotte, a model of virtue, talent and intellect, is nonetheless subject to extinction with no promise of return. Her fate is confusing and unfair, but such is life. Yet for all its pain, the story manages to spin a humane message of hope. Charlotte's immortality lies not in the physical realm, but rather in the legacy of her kindness and the meaningfulness of her creations. Glorious spirit, then, will outlive our Earthly visages - a far more applicable life lesson than those of the everlastingly ravishing princesses. This message of power and profundity found in one's inner beauty, coupled with the awareness of our cultural constraints, gives hope that our gaze will no longer be fixed on the superficial. However, at this point, this battle seems somewhat futile. Beauty may be in the eye of the beholder, but that eye looks through a lens of a culture beholden to beauty.