I love you so much, I want to kill you. 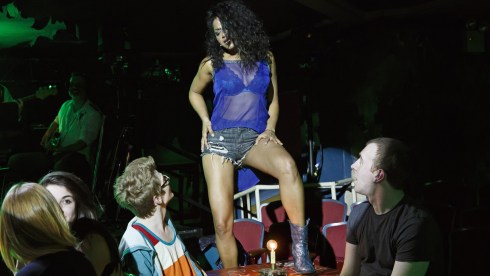 In geometric terms, the eternal triangle can be represented as comprising three points - a jealous mate (A) in a relationship with an unfaithful partner (B) who has a lover (C)...A feels abandoned, B is between two mates, and C is a catalyst for crisis in the union A-B (Wiki)

You get the point. This is the love triangle described unromantically. Everything is fair in love and war, but to qualify as a true love story, at least has to die - the hazardous C lover is removed so that the 'right' romance is possible.

But (there is a but) - The Murder Ballad is not your average musical; is the urban rock and roll drama.

Manhattan. Upper East Side. A bar. She: curly blond, uneducated, beautiful young woman, leather pants, perfect round butt, and pushup bra, gets in love with The King of Downtown: a stud, a lad, a good looking...full-time bartender, full-time heartbreaker, powerful legs in tight jeans, a 1.90m frame covered in pecks, all the six packs clearly defined under the cotton dark t-shirt, aggressive just enough to be sexy, with a Pantene commercial hairdo.

He leaves her for all the available women, his favorite crowd, ready to give him love (through sex) and attention, women who will turn from one night stands in future exes, necessary and unlimited supplies for superficial relationships. Oh, your mamma didn't tell you that you that bad boys are trouble?! Sorry...

She finds comfort in a bottle of vodka. The second and the third help her into self-destruction. Until she meets the phd poet, lacking rock, lacking roll, but with a big heart. He tries. She falls. They marry and have a baby.

Years later: she meets the bartender. She cheats. She is alive again. The guilt is consuming her. The bartender has a middle age epiphany: I want to be the last you (the blond) see.

But the star of the show is the every woman out there, the victims of the promiscuous bartender, interpreted beautifully by Rebecca Naomi Jones (a strong, throbbing voice, photo 1 -  wearing a blue transparent blouse and short jeans) that sings her tragedy in a bar, looking ravishing, angry, sexy, sad.

The theatre stage is transformed into a bar, and the actors are moving between the audience  seated at small tables, luridly lighten. Long bar, bottles of vodka, a pool table, and a live band. Unlike the classical musical, the theme is rock, and the soundtrack is great.

This was my first musical. My taste for the genre is completely undeveloped. Chances are I will never see the Lion King, Hair Spray or whatever. But give me rock ballad and you get my full attention.

Do go and see it at the Union Sq Theatre. Bars have never been so entertaining.


(Short sentences = dissonance, or I just woke up and did not have my coffee)