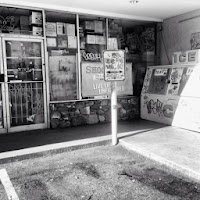 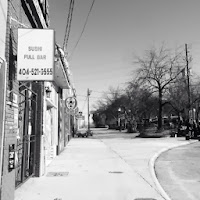 Let us say that it so happens that you are in Atlanta for a weekend. And it is not for conference. Maybe it is due to some unfortunate truth or dare game, in which case, you probably deserve it. Or maybe it is because somebody paid you to be there. Lots. But, regardless, let us assume that life brought you to Atlanta and you have to survive it a weekend, for suicide is not an option. You can chose between two things: lock yourself up in your boring hotel room for the next 48 hours and catch on with Breaking Bad, Orange is the new Black, or Homeland series - which are Emmy winners, and you know that because you read all the newspapers available while trying to kill some hours; or you can give the city a chance and go out. Mind you, Atlanta appear in all the blogs as top 10/20 in the race for the ugliest cities in the world. And there are some bad cities out there.  The downtown in unwalkable, the scenery is not at all pretty, it's a heaven for all chain restaurants, and graffiti seems to be the only source of art. 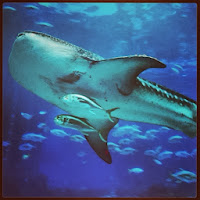 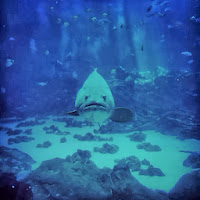 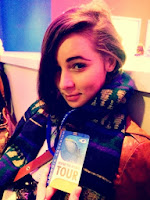 You probably know that aquariums are family traps, with more kids per square meter that in a kinder garden; not for you, the fancy bachelor or successful blogger fashionista. Loud, excited, running all over the place kids, screaming whenever they see a strange looking fish, which happens every ten seconds. The adult you says that that's a NO no.  My advise, just go. Once you get in, you'll be a kid again because, chances are, you haven't seen so many species of crazy looking fish in your entire diving career, though you paid hundreds of dollars cruising the bottom of the oceans after the thousands of dollars for lodging and flight expenses. Marine creatures like wheal sharks with 3 meters wide mouths and throats the size of a nickel and dolphins moonwalking on water. Pay for the behind the scene tour. I never thought I'd go crazy seeing kilometers of pipes, enormous pumps, centrifuges, and complex installations that create artificial waves every two minutes, on the clock, everything behind that keeps 8mil+ gallons of water proper for all the species inhabiting the space. You'll enjoy it even if you're not a plumbing phd. 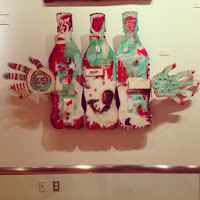 While you're there, cross the street to the World of Coke museum. I know, you don't drink coke as part of your detox routine, and sugar is the most evil of all foods, way before salt and trans-fats (a new study says so, trust me.) But incorporate it into your Atlanta tour and you won't be sorry. After all, you can start your diet again on Monday. You'll get to taste 60 coca-cola beverages from all aver the world, except Cuba and North Korea, which have national plans agains americanization, thus, no Coke. And see some pop art, like the Coke altarpiece on the left. 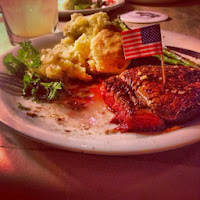 One day passed. You're safe and not dead of boredom. After visiting CNN - yeah, I was disappointed too, I mean, it looks like you are in the food court of a NJ mall - the last hours should be spent around eating. Use uber to get by, cabs are hard to find and more expensive.

Eating: forget all your doctor says and hit the diet-unfriedly restaurants. Like Ted's (Turner) steak house downtown. The man has a bison farm, and he best likes his animals medium-rare. I'm not a carnivore, but that 2x2 inches piece of meat stirred all my natural instincts. It is done to perfection and all other clichés, and, I know, 'melts' is usually just an expression, except when it is true. The good thing about enjoying this fest guilt free is that, afterwards, you'll became a vegetarian. Nothing can top the taste, flavor, and texture. Not even a French Michelin chef in a Parrri restaurant. Hold that thought.

The next day you'll wake up with a food hangover (researched) and your body will crave for anything green, fruits or veggies. Fortunately you're in Atlanta, so can go to the first bar and ask for a bloody marry. I know, I preferred them stirred or in a salad too, but this concept is completely missing in this part of the world. Hey, the bloody marry's are 90% tomatoes, pickles, salt and peper, ran through a blender, as far as I know, so there you go: liquid vitamins spiced with the right amount of alcohol, exactly what you need to start the day.

And the appetite will come back naturally. As much as you want to go back and eat a bloody bison again for brunch, resist that instinct and go in the williamsburg part of Atlanta. $15 (or $7 on uber) later, you'll find yourself in front of Tijuana Garage restaurant, a blend of chipped walls and kitchy decoration gathered from 60 years of American cigarette, canned foods, etc, ads coca-cola street banners. Ask for the tacos platter. Thank me later.

Leave your stomach untouched until dinner time, and go to Mary Mac's Tea Room. The history of the place is written on the pictures on the walls. I mean, everybody, except for Justin Beaber, ate there. All US presidents and their counterparts since 1945. They were all driven there by the original receipes kept intact, still, by cooks that are deep frying everything in the old fashion way. Onions. Potatoes. Meats. Cucumbers. Tomatoes. Okra. Younameit.

In all my travels though Atlanta I met friendly people (a BIG+.) All asked me where I'm from, and then, astonished, what I'm doing in Atlanta. I should have said I came for a conference, as an easy way out, but I was afraid of being associated with the only event in town, something with Jesus, gathering hundreds of  enthusiastic christian teens, so I told the truth: I'm visiting for the weekend. Many found this very strange, so I almost had to come up with excuses: it's good to leave the city, you know, change the air...Even natives from Atlanta, I guess, know that people just don't come here to visit. Granted, I did not see everything, but my feeling is that one doesn't need to.
at 5:44 PM