Letter to a non-misogynist writer 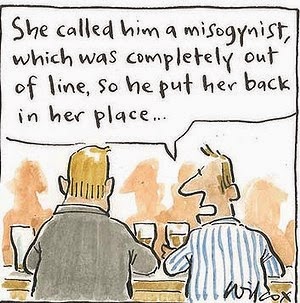 In an attempt to tackle misogyny, a known Romanian writer/editorialist Tiberiu Lovin stumbled on definitions, ideas, and arguments. He wrote a completely inadequate op-ed, 'Am I misogynistic?' meant to explain why, in his view, he doesn't qualify as a misogynist. I will translate mot à mot from his published op-ed.

He continues ‘my humble opinion is that the women that consider any joke just apparently against them or any critique addressed to them represent proofs of misogyny should go to a psychologist or should have more sex. Not because they are crazy, but because they have been traumatized.' - (Dear Mr Lovin, this is hard core misogyny. It shows your logic: attributing the cause of offense to lack of something on their part. You simplify, denigrate, and assume offense-taking is because of lack of intelligence, or worse, sex, or some unknown 'damage.' not because of the lack of tactlessness or the offensiveness of the statement made. It shows your mental shortcut. )

After regurgitating some  more nonsensical ‘blah blah’ (‘I apologize, but something intelligent doesn't come to mind’, he says), he offers the proof that he is, in fact, not misogynist:

‘For those women (n.p. see above), I have to mention that I’m neither gay, nor a retarded person who does’t know “a chip” about (heterosexual) relationships.  It would be impossible to live without women, and also illogical for me to be misogynistic as I am the dad of a wonderful daughter., which, I hope, will be followed by two more. Of course, that would be possible only if I will spot that smart, beautiful, funny woman for a mother - which is hard to find, but not impossible’

The following conversation was a result of not having coffee (and sex, like Mr Lovin would say) before reading his article. Offended, I was not. Not by him, at least; but by the multitude of women that FB-liked his article and praised his writing/ideas (the blog has a female audience) so that I decided to team with the little ones that saw the danger in his train of thoughts.

My arguments on his arguments were met with childish-like behavior: ‘if you really wanna know what I think about women’, he said, ‘you should read this article I signed in this (Tango) magazine.’ Or ‘I will grade your (mine) comments low, but not by much, because you are a woman and I’m afraid being accused of discrimination.’ To my plea of a more read on the subject, because he is using a frivolous angle, inadequate language and arguments while discussing a serious topic, especially in Romania, he mentioned that he is not, in fact, interested in the topic of misogyny at all, and that he just wrote about it as ‘a matter of fact.’ At the end, the writer/editorialist acknowledged that he is not writing academically (though nobody would ever accuse him about that.) He accused his publisher of not fulfilling her ‘moral obligation to take a stand (his side) when the conversation got out of control.’ (?)

His stands as a writer were equally disappointed  A ‘lover of debates’ (his words) - he asked one of his readers, also in disagreement with his approach to the topic, to ‘stop reading and move foreword’ if he doesn't agree with his POV.

What does Mr Tiberiu Lovin think about women?! Well, we have another article to work with.  In the op-ed titled: 'The Fat Women in Our Lives - a Blessing or a Curse' (sic), he starts by saying

'If someone's mother is fat, nobody cares - she is uninteresting to me as a woman and she also has an age... With little sisters is the same, unless she has a brother like me who capaceste  her [beats? pursues? hard to translate Romanian word which can mean both, although it is used in the first sense mostly] until she sends her fat ass to the gym. And not because I'm into incest, but because I care about her image in society.
...
[If fat women want you], you have to make them understand that you are not interested. No way, no how. It is very hard, thrust me, I'm talking from experience, because fat women insist that they will drop wight if you are with them. But they don't. They wanna have you fat as they are.'

You might ask why would I ever listen to this guy and not take his advice. It is not about him. Did I mentioned that he wrote all these on a blog with a women audience, and that he is also the editor in chief at one of most successful Romanian online media website 'virtual reporter'? Yeah, that's why it pisses me off. But maybe he indeed does not get it. Why is he actually wrong?

Dear Mr Lovin, it's not joking about women, or disliking fat women, or liking beautiful women, that make you a misogynist. It's the fact that you are a misogynist that makes you a misogynist. Jokes are funny, often because they are offensive. You can say offensive things, offend and be offended, without believing that the statements or the intent behind them are real. You can laugh at polish joked, romanian jokes, black jokes, lawyer jokes, blonde jokes, any joke predicated on a stereotype, without truly believing that the stereotypes are, in fact, true. Conversely, you can be a racist and claim you are not a racist.

"Men are pigs" haha. Yes, that's funny, many a man would laugh. Some may even be proud to be called one. It's a joke, you see! Saying so doas not make you anti-male. Who is offended by this statement? Men who don't get enough sex? I don't think so. I guess Pigs would be offended by the statement if they could understand the language.

You can prefer fat women, short women, tall women, or pretty (as per your definition) women, without being misogynistic - but to think that the reason people might take offense to such tactless (for that's why they are) statements is due to lack of sex, IS evidence of misogyny. It shows your jump to conclusions, because you don't give women the benefit of a doubt you may offer yourself and to other men.

Misogyny and its sistering sexism and antifeminism are highly sensitive topics in the Romanian society, thus, not a paradox that it is not discussed in the male-dominated Romanian society and media. Mr Lovin's op-eds demonstrate that the damage done but not talking about something is not so bad than the damage done by talking poorly about it. Reducing the debate to some ‘club’ conversation with arguments like ‘I love women, I have a daughter myself, thus I’m not a misogynist’, coming from anybody but even more when they come from an editorialist, are as poor as saying I’m having interracial sex, thus I'm not a racist.

I talked to a friend about it, and he had the following message to my non-misogynist con-national.

From male to male:

Sending links to convert me to the opinion that you are not a misogynist based on what you wrote elsewhere is a wasted effort.

As you are a writer and an editor, you should be proving to all your readers through your words and opinions - including the readers of this blog - of your actual beliefs.

As it stands now, Shakespeare would say “(he) doth protest too much."

Don't scream “I am not a misogynist”; publish articles that extol the amazing qualities of women.

*I do not believe that the discussed writer hates women and girls. Or at least I hope he doesn't. Althoug, saying 'I am not a misogynist' does not make it true. Showing you respect women, not as objects of your desire (beauty) or lack thereof (fat), but as equals, through your actions and writings - that is what it takes to prove that you are not.

What I do hope is that he will never write about topics that doesn't know or care about. In Romania, we have too manny of these. He should stay with things that are less foreign to him so that his writing has some sort of esthetic or informational value. Or, giving his take on things, he should look for another job ASAP. In a different country, he will be banned even from twitter...

**To make things clear, I am not sure what Mr Lovin's definition of misogyny is:

Wikipedia english: hatred or dislike of women or girls. Misogyny can be manifested in numerous ways, including sexual discrimination, denigration of women, violence against women, and sexual objectification of women

Wikipedia Romanan: an atitude of hostility or contempt in regards with women.

Oxford dictionaries: dislike of, contempt for, or ingrained prejudice against women

Or Bill Shorten: 'people who have a prejudice about women in certain occupations and they have an unexamined view in their own head about the status of women and the equality of women to do a whole range of things'

But, at the end, I don’t think that it matters much for him. Obviously, he has no interest in the topic...
at 3:53 PM